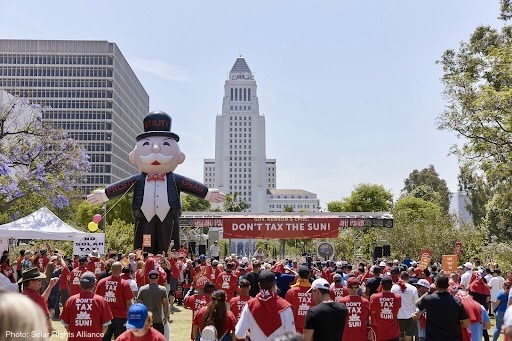 After about six months of near silence from the California Public Utilities Commission (CPUC) since their December 2021 proposed decision that would decimate the state’s rooftop solar agreement, net energy metering, they have recently announced that they are re-opening the proceeding to get input on some new elements of the proposal. Here is what we know:

One of the most criticized elements of the proposed decision was the CPUC’s proposal to impose a fixed monthly charge for all solar customers. Previously, the charge was to be based on the size of the solar system, which would have resulted in $60 per month for an averaged sized residential solar system. The CPUC is now asking for feedback on charging customers based on self consumption - the solar energy customers produce and use at home. The less energy that is bought from the utility because of the solar, the higher the fee. The amount of the fee could be anywhere between $300-$600 per year on average. Local, state and federal governments have encouraged rooftop solar, similarly to promoting energy efficiency, which also reduces a household or organization’s energy use, lessening stress on the grid while minimizing CO2 emissions contributing to the climate crisis. A solar tax that punishes residents for using less energy is like taxing people for growing their own food instead of buying it from the grocery store. The proposed solar tax directly contradicts what the Newsom administration has said is one of their top priorities, addressing the rapidly accelerating climate crisis.

Rooftop solar advocates, climate justice organizations, elected officials, community choice energy programs, houses of worship, nonprofits and schools have openly criticized the idea of taxing solar customers, which has resulted every single CPUC public voting meeting  being flooded with phone calls of concerned California residents voicing their strong opposition, which have lasted up to seven hours. The distributed solar and storage industry has been very loud in voicing opposition as well, hosting a number of rallies outside of the CPUC headquarters and turning out thousands of solar workers with one request: don’t kill our solar jobs.

Another upsetting element of the December 2021 proposed decision was the idea to dramatically reduce the amount solar customers are compensated for sharing their excess energy with their neighbors. Unfortunately, a dramatic reduction in export compensation is still on the table, however the question that remains is how quickly those amounts will decrease. The industry has spoken very loudly on this particular issue, stating that a drastic reduction in export compensation would completely halt the growth of solar across the state.

It is clear that both the CPUC and Governor Gavin Newsom have heard the voices of opposition and felt the pressure to distance themselves from the December proposed decision, with the governor stating in a press conference that “there is more work to be done.” It is clear that the CPUC still has plans to make serious changes to net metering, which will undoubtedly slow solar adoption and lead to more climate injustices.

Locally, advocates in San Diego have been very vocal in criticizing the CPUC, and this potential new proposal comes in the middle of San Diego Gas & Electric increasing their rates making San Diego the city with the highest price for energy in the country and resulting in one out of four San Diegans unable to pay their electric bills.

The timeline remains unclear, however a revised proposed decision could come out as early as July, with a vote as early as August. To learn more about how you can get involved to help save rooftop solar in California, visit our toolkit!