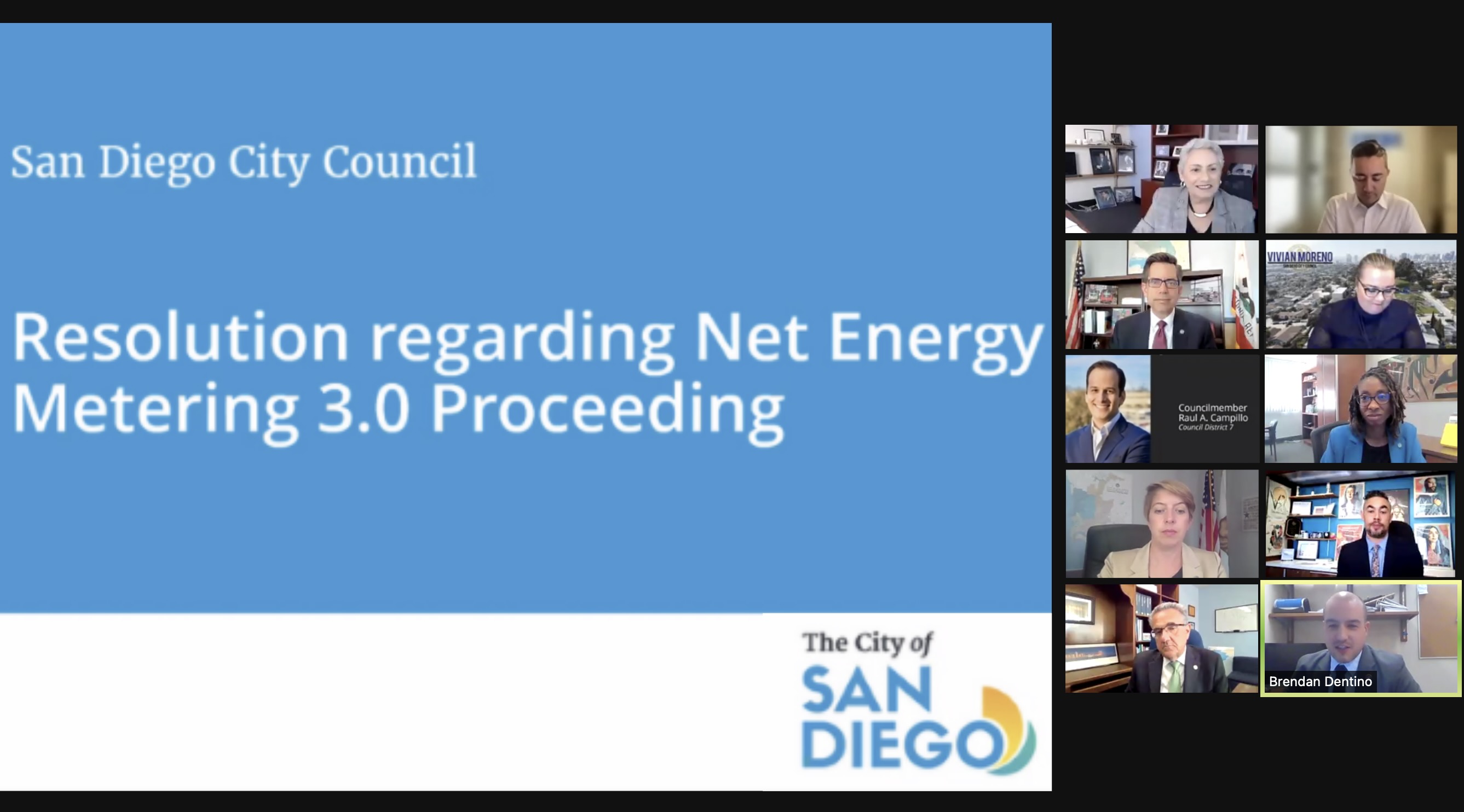 The net metering resolution, which urges the CPUC to create a structure that will keep rooftop solar growing sustainably while expanding solar access to low-and-moderate income communities, was approved unanimously by the San Diego City Council today after receiving unanimous support during the San Diego Environment Committee last month.  Local organizations SanDiego350, Climate Action Campaign, Protect Our Communities Foundation, CED Greentech and the San Diego Democrats for Environmental Action joined the Hammond Climate Solutions team in making verbal comments in support of the resolution today, emphasizing the importance of this decision in the middle of a climate emergency.  Last month over 60 people made comments in favor of the resolution.

“Rooftop solar is a lynchpin in the city's legally-binding Climate Action Plan,” said Matthew Vasilakis, Co-Director of Policy with Climate Action Campaign.  “We need to incentivize rooftop solar and storage with a strong NEM program and paired investments in communities of concern.  That's how we build a climate resilient 100 percent clean energy system.”

Councilmember Raul Campillo, who was one of the first elected officials in the state to issue a letter to Governor Newsom advocating for a solar-friendly net metering 3.0 agreement, called out the importance of this resolution during his remarks today.

“This {resolution} ensures that the City of San Diego has communicated its priorities to the state on this matter, and we cannot afford any changes to this {net metering} policy that slows down the process or limits accessibility to clean energy.  This resolution speaks loudly and clearly that the City of San Diego wants to protect the environment, create good paying, high-skilled jobs, improve our energy resiliency and save ratepayers billions of dollars."

Beyond the obvious carbon emissions reduction, local grid reliability and cost savings that come from the increased adoption of rooftop solar and energy storage, the San Diego region has thousands of local jobs at stake with this decision.  Jake Marshall, Operations Manager with CED Greentech San Diego, a distribution company out of Mira Mesa, called in to support the resolution.  Marshall’s comment highlighted the potential massive job loss that could result if the industry is forced to slow down.

“I personally employ 75 people in Mira Mesa, we have run the numbers and with the {investor-owned utilities’ anti-solar} proposals, our numbers will go down to 22 people.”

The resolution states that the City of San Diego “supports a CPUC NEM 3.0 decision, which emphasizes the sustainable growth of customer sited solar electric and energy storage facilities in order to meet California’s clean energy targets, particularly residential customers in disadvantaged communities” while also advocating to “reject elements of any proposal which will stifle sustainable growth of customer sited renewable generating facilities including high monthly fixed charges and avoided cost models which insufficiently account for the societal value of customer sited renewable generation.”

Council President Jennifer Campbell ended the discussion by calling out the intentions of the investor-owned utility companies.

“It's clear the investor-owned utilities are working hard to hamper solar energy growth, which is very short-sighted of them, as they could utilize this extra energy obtained to provide energy for other people in geographic areas that do not have as much sunshine as we have.  The cost shifting that {the investor-owned utilities} are proposing will hurt our climate action goals, will hurt our green job growth and the affordability of those who wish to push solar on their roofs.  Unfortunately it seems that their immediate bottom line is more important to them than a cleaner, green San Diego in which all income levels can participate in our abundant sunshine.  Let the {C}PUC know that San Diego stands on the side of rooftop solar, especially in communities of concern, and all the benefits of it, from good paying local jobs to healthier neighborhoods and increased clean energy production as solar energy brings.”

Once again, the only comment that was not emphatically in support of protecting rooftop solar was from one San Diego Gas & Electric employee who urged the council to meet with the Natural Resources Defense Council, an organization who is known to side with the utilities on this issue (learn more in this blog post, How an Environmental Group Aligned with Monopoly Utilities to Squash Rooftop Solar).

The City of San Diego weighed in just in time before the anticipated proposed decision by the CPUC in December, while other cities and organizations in San Diego county have already gone on the record in support of protecting access to rooftop solar and energy storage.  In September, the City of Solana Beach became the first city in the state to issue a resolution standing up for a strong net energy metering with a unanimous vote.  San Diego Community Power, the community choice energy program for the cities of San Diego, Imperial Beach, Encinitas, La Mesa and Chula Vista, also submitted a letter jointly with San Jose Clean Energy, which highlighted the fact that the net metering proposal by the investor-owned utilities would result in fees that community choice energy customers would not be able to avoid.  Earlier last week, the City of Chula Vista voted unanimously to send a letter and approve a resolution calling for the CPUC to create a policy in which solar is able to continue to grow, and this week, Imperial Beach Mayor Serge Dedina released a letter in support of a strong net metering 3.0 agreement.

As the proposed decision by the California Public Utilities Commission rapidly approaches and the final decision expected by February of next year, local activists are hoping this resolution will lead to San Diego Mayor Todd Gloria weighing in as well to leverage his existing relationship with Governor Gavin Newsom.

For latest information and up-to-date calls to action, visit our net metering toolkit at www.HelpCleanEnergy.org