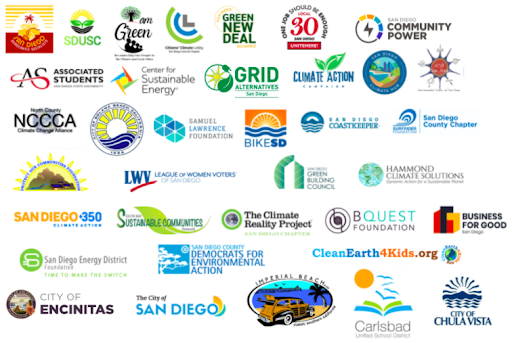 A year-long battle to save rooftop solar in California is nearing a final decision.  Although going up against the monopoly utility companies and their allies has not been easy, local advocates have been successful in sending a loud and clear message: San Diegans want to protect rooftop solar and expand equitable access to solar and storage.  A proposed net energy metering (NEM) decision is expected to be made in December with a final decision expected by February from  the California Public Utilities Commission (CPUC), which will decide the future rooftop solar agreement in California, known as net energy metering 3.0 (NEM 3.0).

Along with our partners in San Diego, we helped grow a coalition of over 40 local environmental, climate justice and advocacy organizations, five cities, the state’s second largest community choice energy program, schools and local elected officials to weigh in on the net energy metering proceeding to advocate for the continued growth of rooftop solar.  Over a year ago we reached out to San Diego-based solar advocates and helped establish and co-lead the Save California Solar coalition with the Solar Rights Alliance, which meets monthly and has many San Diego-based and statewide organizations involved.

The City of Solana Beach led the charge in September, becoming the first city in the region to adopt a net metering 3.0 resolution, which specifically called out the investor-owned utilities’ proposal and its potential to disrupt the market.  The vote at Solana Beach’s Climate Action Commission and city council were unanimous after hearing many local organizations speak in support during public comments.

“I am completely in support of the resolution,” said Solana Beach Deputy Mayor Kristi Becker.  “Everything we do on the city council, at the Climate Action Commission  for the Clean Energy Alliance, we've all been trying to encourage renewable energy so we need to make sure that it remains affordable and we also have to make sure it is affordable for those in our communities of need.”

Following the Solana Beach resolution, the Chula Vista City Council and Imperial Beach Mayor Serge Dedina sent letters to Governor Gavin Newsom, both advocating for the CPUC not to make any drastic changes to the current net energy metering policy, which has been very successful in finally making solar accessible to communities of concern.

In November, the City of San Diego, America’s second-best solar city, became the largest city in the state to weigh in on the proceeding.  San Diego Councilmember Raul Campillo, who was one of the first elected officials in the state to issue a letter to Governor Newsom advocating for a solar-friendly net metering 3.0 agreement, called out the importance of this resolution during his remarks.  “This {resolution} ensures that the City of San Diego has communicated its priorities to the state on this matter, and we cannot afford any changes to this {net metering} policy that slows down the process or limits accessibility to clean energy. This resolution speaks loudly and clearly that the City of San Diego wants to protect the environment, create good paying, high-skilled jobs, improve our energy resiliency and save ratepayers billions of dollars."

Shortly after San Diego’s resolution was approved, the City of Encinitas weighed in with a letter from the city council and Mayor Catherine Blakespear, which stated “the City of Encinitas was proud to be one of the first cities in the region to join a community choice energy program, San Diego Community Power (SDCP), and we have plans for our program to benefit the community in various ways, and net metering plays a role in our impact.  The solar fees that are being proposed by the IOUs are fees that SDCP will not be able to avoid, meaning that rooftop solar for our community choice energy program customers may still be inaccessible despite SDCP’s solar-friendly NEM rate, which is bad for our community members, makes it harder and more expensive for SDCP to reach 100 percent clean energy and takes away from potential program opportunities to benefit the community.”

It is very clear that the organizations, elected officials and San Diego Community Power understand the impacts that a bad NEM 3.0 decision could have on the climate as well as local and statewide clean energy goals.  In all of the local advocacy in meetings regarding net energy metering, SDG&E has been the only opposition, citing concerns over equity, which we believe are not only disingenuous, but unfounded.  Very credible studies show that rooftop solar reduces rates for everyone because it reduces the cost of maintaining long distance power lines as well as wildfire costs associated with those power lines.  A recent study by Vibrant Clean Energy shows rooftop solar can save California ratepayers $120 billion!  Rooftop solar threatens the monopoly utilities’ profits, and that is their true motivation for advocating for reform. California’s investor-owned utility companies have not only tried making solar less accessible to all, they have also blocked efforts for community choice energy, community solar, on-bill solar financing and other tools to make solar more accessible.

The battle over the future of rooftop solar in California continues, but we hope that the CPUC commissioners will consider all of San Diego’s advocacy surrounding this issue and that the proposed decision released next month will reject elements of the IOUs’ proposal that would make it harder for communities of concern to go solar, namely high monthly solar fees, decreasing export compensation and instantaneous netting.

None of this work would be possible without the dedication and commitment from local advocates, the majority of which volunteer their time for this cause.  Rooftop solar is a key climate solution, and with the devastating effects of the climate crisis already occurring throughout California, now is the time when we should be discussing how to incentivize more people, especially in communities of concern, to adopt solar and storage.  A big thank you to the following organizations, schools, elected officials and cities:

We appreciate all of our partners in this effort and would like to give a special shout out to Climate Action Campaign, SanDiego350 and San Diego Urban Sustainability Coalition, along with the Solar Rights Alliance, which have attended countless meetings and presentations to move all of the aforementioned efforts forward.

More details about the NEM 3.0 proceeding can be found at www.HelpCleanEnergy.org.