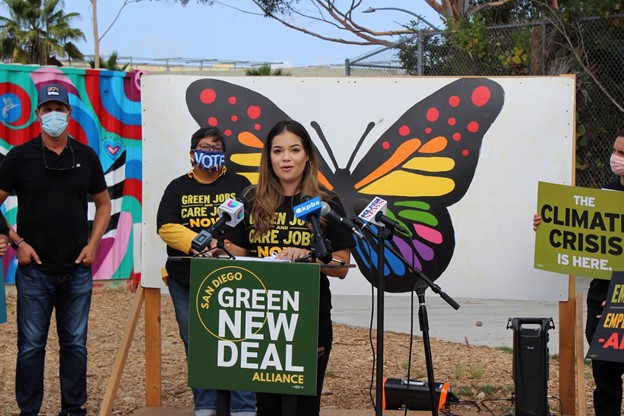 This year’s clean energy and climate justice policy advocacy was filled with ups, downs, wins and loses but the Hammond Climate Solutions team is grateful for the strides we were able to help with to ensure a just and livable future for all.  Here is a look back on our policy work in 2021, much of which was done with various partners that we’re grateful to be working with.

Our policy advocacy kicked off with the introduction of California Assembly Bill 1139 (AB 1139), introduced by Assemblymember Lorena Gonzalez in February 2021.  The bill is the most aggressive solar attack to date, and it would have made drastic changes to the rules for California’s net energy metering (NEM), the solar agreement, which would have resulted in payback periods for rooftop solar investments of over 45 years.  In addition to changes for new solar producers, the bill proposed these changes for all existing customers as well, changing the presumed protections for over 1.3 million solar producers statewide.  Our advocacy included meeting with the author of the bill and sponsors to advocate for changes, rallying voices in opposition when the bill was introduced in assembly committees and presentations to local and statewide organizations to collect sign-ons for multiple letters.  Thankfully, we were successful in defeating the bill and in rallying enough opposition locally that none of the six assembly members representing San Diego County, aside from the bill’s author, voted yes.  This was a huge victory as rooftop solar and energy storage is a key solution to stopping the climate crisis, lessening environmental racism, providing grid resilience and supporting green jobs!

In between the small wins and fights, we have been leading a year-long fight to protect and expand access to rooftop solar during the California Public Utilities Commission (CPUC) proceeding to determine the future solar agreement in the Golden State.  Attacks from the California investor-owned utilities, Natural Resources Defense Council (which has a history of aligning with the monopoly utilities companies, which you can read about here) and other utility-aligned, anti-solar groups have resulted in a proposed decision to drastically reduce benefits for solar customers, making rooftop solar inaccessible to all but the very wealthy.  Hammond Climate Solutions has helped to build a grassroots coalition of environmental and climate organizations, schools, cities, elected officials and more who are all standing up to protect and expand access to rooftop solar.  Through our advocacy and coalition building, we have helped five cities in our region submit letters or resolutions to the CPUC and Governor Newsom, advocating for a strong net energy metering agreement, the agreement that has allowed rooftop solar to become increasingly accessible to working class families, schools, small businesses and nonprofits.  More information on the recently-proposed decision, its impacts and how you can help protect rooftop solar as a climate solution can be found here.

Alongside efforts to protect rooftop solar and expand solar access in communities of concern, locally we were also very involved with a coalition advocating for the City of San Diego to cut ties with a fossil fuel corporation when renewing its gas and electric franchise agreements, which was up for renewal for the second time in a century.  The gas and electric franchise agreements would have determined whether we could build a clean energy future or if we would have been locked into another long term agreement with dirty fossil fuels.  After calling in to countless city council and committee meetings, attending meetings with city council members and organizing rallies and press conferences, we were confident that San Diegans made their voices clear that the broken energy system under San Diego Gas & Electric (SDG&E) was not working, and after over an hour of public comments in opposition to awarding the franchise agreement to SDG&E, the city council disappointed us in a 6-3 vote.  SDG&E promised programs and funding in order to secure the franchise agreements, including a Solar Equity Fund to subsidize solar for low-income families, however after a few stakeholder meetings which Hammond Climate Solutions attended, there has not been any progress in moving the program forward.  We plan to stay engaged with helping shape the Solar Equity Fund to be as beneficial to San Diegans as possible.

Although the majority of our advocacy this year has been energy related, we were also involved in a number of wins for building electrification ordinances around the county.  Through our involvement in the San Diego Building Electrification Coalition, we were able to help in successfully urging Encinitas and Solana Beach to pass all electric building reach codes for new construction buildings, a huge win considering buildings make up a significant portion of the region’s greenhouse gas emissions.  In addition to securing building electrification ordinances, we have also helped in advocating for a regional transportation plan, a truly innovative and first of its kind plan that will bring our regional transportation system to where it should be, getting people out of their cars and into other modes of sustainable transportation.  Through our membership with the San Diego Green New Deal Alliance, we have also been advocating for zero carbon policies as well as family sustaining green jobs and a just transition for workers.

While most of our advocacy and policy work was focused on local and statewide efforts, Hammond Climate Solutions was also involved in a federal advocacy effort in partnership with the California Green New Deal Coalition to encourage a federal infrastructure package that would not only provide much needed funding for failing infrastructure, but also provide funding for climate and resiliency efforts with a focus on creating good green jobs.

Although this year has had climate activists on the defense fighting against utility attacks, we are hopeful next year will bring legislation and policies that can lead to a productive and meaningful 2022.  In addition to our success in our policy advocacy, we have also had success with the programs that Hammond Climate Solutions manages and with the San Diego Climate Hub collaborations.  To learn more about our other work throughout the year, visit our recent blog post, Celebrating Climate Action - 2021 Year in Review.