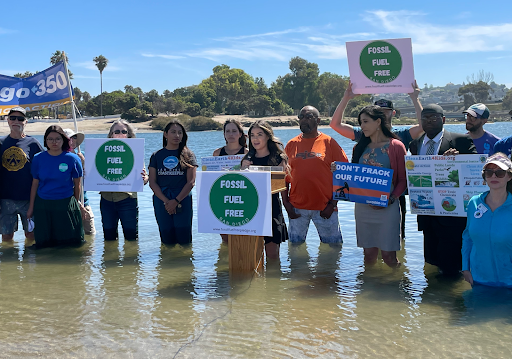 It’s no secret that fossil fuel companies give funding to nonprofits and elected officials, and activists note that allegiance is often expected in return for those funds. Some nonprofit organizations that have accepted fossil fuel money have publicly supported a fossil fuel company’s anti-climate initiative, even when the initiative conflicts with the organizations’ mission, values and hurts the communities being served by the nonprofit. Fossil fuel companies have also invested billion of dollars to support elected officials and candidates who will vote for policies and laws that continue to benefit polluters.

Locally, two big fossil fuel corporations contributing funds to nonprofit organizations and candidate campaigns are San Diego Gas & Electric (SDG&E) and its parent company, Sempra Energy. SDG&E touts its renewable energy content in its state-mandated renewable portfolio standard program, although Voice of San Diego reported last year that SDG&E Walks Back Claim it Delivers 45 Percent Renewable Energy, citing only 31 percent of energy San Diegans consume is zero carbon. While SDG&E claims to support clean energy, their net energy metering proposal at the California Public Utilities Commission would erode the economics of rooftop solar, making solar out of reach for many Californians while setting what activists say is a dangerous nationwide precedent to rely on dirty energy for a longer period of time. If SDG&E’s net metering proposal is adopted, it would also lessen the benefits that the City of San Diego’s new Solar Equity Program has for San Diegans in communities of concern. Meanwhile Sempra Energy sold off renewable assets and continues to invest heavily in fossil fuels, primarily fracked gas, which accelerates the climate crisis and contributes to various climate injustices in California.

With the climate crisis worsening, scientists, leaders and climate activists say it is now more urgent than ever to end our reliance on fossil fuels. Divesting from fossil fuel support and standing behind companies that prioritize clean energy, green jobs and communities of concern has never been more critical. In fact, earlier this year, the San Diego County’s Board of Supervisors made the unanimous decision to divest from fossil fuel companies. This allows the County to invest its money in companies that do not detrimentally impact the environment and accelerate the climate crisis.

"The fossil fuel industry has invested millions of dollars towards campaign contributions, organizations and front groups to ensure billions of dollars in subsidies and laws that benefit polluters,” said Karinna Gonzalez, Climate Justice Policy Manager with Hammond Climate Solutions Foundation. “The Fossil Fuel Free Pledge is starting here in San Diego, and it will cut off the fossil fuel industry’s influence so that we can make meaningful progress towards a just and livable future."

“As we stand here knee-deep in water, I would be remiss if I did not point out that this is our future if we allow fossil fuel companies to donate a penny to the environment while spending thousands to destroy it,” said Lucero Sanchez, Campaigns Manager with San Diego Coastkeeper.