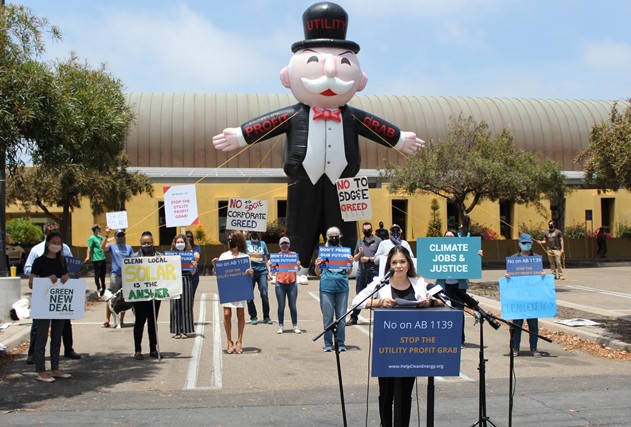 Today, California Assembly Bill 1139, nicknamed the “anti-solar” bill, has failed after unsuccessfully garnering enough votes to leave its house of origin, the assembly, by the deadline.  Community leaders, climate justice advocates, school and teacher unions, nonprofits and residents have been working to build opposition to Assembly Bill 1139 since the bill was introduced by San Diego Assemblymember Lorena Gonzalez in February of this year.

Assembly Bill 1139 would have devastated the economics of going solar in California, threatening thousands of solar jobs and billions of dollars of economic benefits across the state.  The bill would have hurt working families, schools, small businesses, community centers, municipalities and nonprofit organizations, while making solar inaccessible to low-to-moderate income families.  By eroding the economics of going solar, Assembly Bill 1139 would have also increased environmental injustices from fossil fuels while accelerating the climate crisis, which often impacts communities of concern first and worst.

Assembly Bill 1139 was introduced to the full assembly for a vote yesterday, on June 2, and the bill was 16 votes shy of the 41 votes needed to pass the bill out of the assembly.  The bill was then asked to be reconsidered for a vote later that afternoon, and again, it failed to receive enough support to pass.  Today, the bill was moved into the state legislature’s Inactive File, meaning Assembly Bill 1139 will not be voted on again during this year's legislative session, but it could be reintroduced in January of 2022.

“We are thrilled to see that assemblymembers, especially locally, were able to see past the false equity narrative that utilities have been attempting to push for years and stood up for rooftop solar,” said Karinna Gonzalez, Climate Justice Policy Advisor with Hammond Climate Solutions, which spearheaded the statewide effort to oppose this bill with the Solar Rights Alliance and help from local partners.  “This bill would have had devastating impacts, not only for solar customers, but also for jobs and the climate. Looking forward, we hope to continue to work with elected officials locally and statewide to expand solar access to communities of concern.”

After yesterday's event in Chula Vista, newly-elected Assemblymember Dr. Akilah Weber, representing California's 79th Assembly District, changed her vote from ‘yes' to abstaining.  Aside from the bill’s author, none of San Diego County’s six assemblymembers voted in support of this bill.

“I am so grateful to the activists that bravely stood up to special interests and spent countless hours opposing this bill to help protect our vision of a just, livable future,” said Tara Hammond, founder and CEO of Hammond Climate Solutions, who gave a special shout out to SanDiego350, Climate Action Campaign and Protect Our Communities Foundation for their help defeating this bill. “This is a testament to the power of the people and recognition that Californians overwhelmingly support rooftop solar as a key climate solution.  We would like to prioritize helping communities of concern adopt solar and storage, becoming local resilience hubs, and we’re glad that opportunity wasn't taken away by Assembly Bill 1139.”

San Diego has been ranked the top solar city in America numerous times, in terms of solar capacity and number of installations.  While San Diego is currently ranked second, it’s home to hundreds of local solar companies that employ thousands of local residents and provide over a billion dollars in economic benefits to the region each year.  Local nonprofit organizations Center for Sustainable Energy and GRID Alternatives are administrators of the Solar on Multi-Family Affordable Housing program, which offers state rebates for affordable housing to receive subsidized solar power systems.  These administrators were also in opposition of Assembly Bill 1139 due to the negative impact it would have had on current and future affordable housing solar projects in the region and statewide.

Today’s news is a big win for local climate activists and green jobs since it means rooftop solar will continue to expand, furthering access to solar for communities of concern.  It also helps keep California on track to reach critical climate targets that are set across the state.

“The fact that Assembly Bill 1139 did not pass is a huge cause for everyone to celebrate,” said Maleeka Marsden, Chair of the San Diego Green New Deal Alliance and Co-Director of Policy at Climate Action Campaign, two of 30 local organizations that came out in opposition to Assembly Bill 1139 among 150 statewide organizations.  “If Assembly Bill 1139 had passed, we would have gone backwards, not forwards, towards meeting critical climate goals and advancing equity.”

This outcome surfaced at a time when California is seeing an exponential rise in detrimental consequences from the climate crisis and environmental racism.  A recent report authored by Daniel Kammen, Teenie Matlock, Manuel Pastor, David Pellow, Veerabhadran Ramanathan, Tom Steyer, Leah Stokes and Feliz Ventura show that climate change is occurring at a faster, more destructive rate than previously known, requiring California to accelerate statewide climate efforts.  One of the report’s key findings concluded that a dangerous level of climate change, determined by an average temperature increase of 2.7℉, will be reached as early as 2027.

“While we’re relieved the Assembly scrapped this bill, we know that SDG&E and PG&E will continue to follow the utilities playbook in attacking rooftop solar,” said Masada Disenhouse, executive director of SanDiego350. “That’s why we will remain vigilant and committed to fighting those attacks and to working in our communities to develop innovative, equitable solutions to get to zero carbon."

There is interest among local activists and those in the clean energy industry to reform the investor-own utility model, which incentivizes the utility companies to build more infrastructure, guaranteeing a return on investment for the shareholders at ratepayers’ expense. Instead, activists would like to see solar for renters, community solar programs and other investments that address equity and help move the region toward zero carbon.